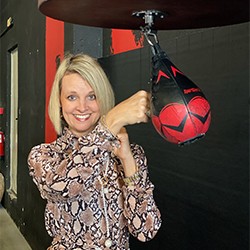 Susannah Schofield OBE is the Director General of the Direct Selling Association, the industry body for the direct selling channel of retail in the UK, and industry worth billions. Alongside her role as Director General, Susannah remains actively involved in two businesses which she founded: Global sports app, Pitch Sports, and as a Licensed Female Boxing Promoter representing Women Boxers under the Unified Promotions Ltd banner.

Prior to her appointment as leader of the DSA, Susannah spent 18 years at Royal Mail, culminating in her holding the Board-level role of Commercial & Innovation Director, where she led a team of over 500.

A passionate advocate for women and young people in business, Susannah was awarded an OBE for her work in this area in the 2015 Queen’s Honours List.

She continues to champion women in business, and is a regular international speaker on the importance of flexible working and portfolio careers.

As well as being a published author (of business strategy book Mind the Gap), Susannah has lectured for The University of Kent and City, University of London, and has also served as an advisor to the Department for Business, Innovation and Skills (BIS).

Susannah and her family divide their time between the UK and Portugal, demonstrating the new fluid way of working. Susannah also owns a Restaurant & Cocktail bar in the Algarve.